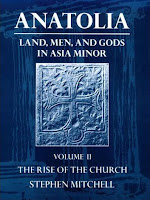 These two volumes are presentations of the Anatolian history from the Celts to the sixth century. They are clearly written and well documented and informed from historical, archaeological and – although to a lesser degree – theological studies. Mitchell concentrates upon central Anatolia, viz. the province of Galatia but is nevertheless usefull for Revelation studies with regard to the relationship between the empire and the Eastern provinces.