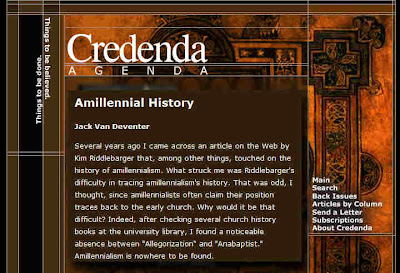 When looking at the Internet for information about Abraham Kuyper, I came across this very interesting article on the history of the term and concept of amillennial(ism): “Amillennial History,” by Jack Van Deventer, over at Credenda/Agenda (see here for the text and here for the notes).

The concept was not invented until the 20th century. “Having become convinced of history’s downward spiral, yet having rejected dispensationalism as unbiblical, presbyterian, and Reformed people were in need of their own theological rationale for pessimism.”

“The amillennial solution was to reassign the biblical victory passages to the heavenly or spiritual realm. The kingdom of God was allegorized, spiritualized, and explained away as other-worldly, another spiritual dimension, a land beyond time and beyond our grasp. The prophecies of doom and destruction, of course, were retained and applied to the earthly realm. In other words, keep the curses, discard the blessings. Although a younger doctrine than dispensationalism, amillennialism met the same need and fit the mood of the day.” Read it all.

Whether Van Deventer is right about the historical explanation or the underlying theological conceptions is another matter. What do you think?