You are here: Home / Criticism / Church-historical interpretation / Hengstenberg, The Revelation of St. John 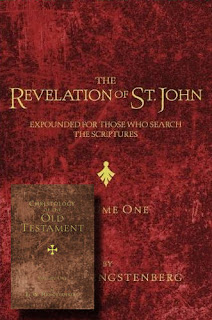 E. W. Hengstenberg, a very learned German Lutheran professor and pastor, published two editions of his commentary on Revelation. Only the first edition was translated into English. The second from 1861-1862 was not.

Hengstenberg was one of the major spokesmen for “repristination theology.” They were quite influential (see Bengt Hagglund, History of Theology, 1968 p. 363f).

Some of Hengstenberg’s contemporaries expected a future millennium. Hengstenberg, however, “preferred the Preterist point of view and equated the millennium with the Germanic ascendancy that he dated from 800 until about 1800” (Wainwright, Mysterious Apocalypse, p. 135).

In general, Hengstenberg defended the church-historical approach. “Their theory, sometimes known as kingdom history, treated the Apocalypse as a prediction of the main periods of history and understood it as a prophecy of the triumph of God’s kingdom” (ibid.)

Perhaps the author was an optimist. Perhaps readers were different 150 years ago. Be that as it may, the author wrote:

“The Revelation of St. John was for a long time a shut book to me. That it was necessary here to lay open a new path, that neither the course pursued in the older ecclesiastical, nor that of the modern Rationalistic exposition was to be followed, I never entertained a doubt….

“The title shows that this work is intended for all who search the Scriptures. The remarks contain little of a grammatical nature. The text will present no difficulties to cultivated readers, even though not theologians, if they are only animated by the earnest desire to become thoroughly acquainted with the contents of the book….

“I commend this work, the deficiencies of which I deeply feel, to Him who has given me strength to execute it thus far, and who has rendered it to myself a source of edification and comfort.” (From the publisher’s page)

Among many other works, E. W. Hengstenberg also wrote the 1400 page, two-volume The Christology of the Old Testament (also available from Wipf and Stock Publishers here).