You are here: Home / Theology / Christology / Trench, Epistles to the Seven Churches 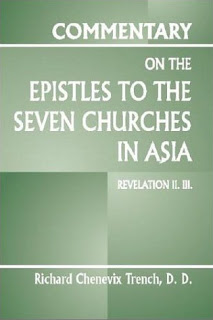 Richard Trench, Doctor of Divinity, and archbishop of Dublin 1864-1884, was also the author of the well-known Synonyms of the New Testament.

This commentary, which despite the title includes a commentary on 1:4-20, was written while Trench was Dean of Westminster. It is based on the lectures he gave three times to the theological students at King’s College London.

In the introduction Trench comments on the many exegetical problems as well as on “the entire originality of these seven Epistles” (p. 8; cited from the pdf-edition mentioned below). “While the analogy of faith is perfectly preserved, while there is no difficulty in harmonizing what is here said of Christ’s person and offices with what is taught elsewhere, yet how wholly new a series of titles are these” (ibid.).

Trench emphasises that “there is enough in these two chapters alone to render Arianism entirely untenable by any one who, admitting their authority, should consent to be bound in their interpretation by the ordinary rules of fairness and truth” (p. 9). But Trench did not only value the theological substance of Revelation.

“And, finally, the practical interest of these Epistles in their bearing on the whole pastoral and ministerial work is extreme” (p. 10). The seven messages “are full of teaching, of the most solemn warning, of the strongest encouragement” (ibid.). Indeed, “We learn from these Epistles the extent to which the spiritual condition of a Church is dependent upon that of its pastors; the guilt, not merely of teaching, but of allowing error …” (ibid.).

Trench laments that Revelation 2-3 is never heard in the Anglican Churches, and that private reading among the people is scant (p. 11). These are “chapters so rich in doctrine, in exhortation, in reproof, and promises …” (ibid.).

Trench argues that the author is John the Apostle. The alternative is that John is a falsarius. (p. 14). He was banished to Patmos for his steadfastness in the faith of Christ Rev 1:9); he was only released at the accession of Nerva (see p. 37), and “The whole book breathes the very air of martyrdom” (p. 37).

Trench argues that ‘in (the) Spirit’ means “a condition in which there is a suspension of all the motions and faculties of the natural life” (p. 38). However, according to Rev 10:4, John was about to write, so some faculties were retained.

The Epistle – for, according to Trench, the Apocalypse is indeed an ‘epistle’ – is written to the seven church and the Church, they represent “in their mystic unity” (p. 16; cf. pp. 42-45).

Trench comments on the salutation, but does not explain what grace and peace really mean (p. 17). Perhaps he simply assumes that his readers know.

Key-note to the whole book

Commenting on ho erchomenos in Rev 1:4, Trench identifies the key-note to the whole book as “I come quickly.” “It is Christ’s word of comfort, or, where they need it, of warning, to his friends; of terror to his foes” (p. 19). This must be the meaning of ho erchomenos here as well. I agree. With Origen, Trench asserts that Rev 1:4 yields evidence for “the equal divinity of the Son with the Father” (ibid.).

The ‘seven spirits’ is the Holy Ghost, Trench argues (p. 20f). Again, I agree with Trench’s conclusion as well as his arguments. Trench cites Richard of St. Victor, as regards the interpretation of ‘the faithful witness’ in Rev 1:5. Today, most will interpret it in the light of the OT or in the light of Jesus’ actual testimony before Pilate. Trench/Richard interprets it theologically.

As to the many departures from ordinary grammar, Trench asserts that “the doctrinal interest here overbears the grammatical” (p. 23). For other explanations, see Laughlin, Solecisms and Beale, Use of the OT.

Trench makes use of the Old Testament as well as the rest of Revelation. ‘The prince of the kings of the arth’ is “A manifest reference to Ps. ii 2” (p. 26). Naturally, Trench’s text-critical remarks are outdated. Yet they are not without interest (see pp. 28, 29).

The ‘angels’ of the seven churches

Of the many well-made observations, I must restrict myself to mention that Trench identifies the ‘angels’ of the seven churches as the bishop (p. 78). Trench reminds us that there were many elders of the Ephesian Church already at Paul’s time (Act 20:17, 25). “And yet now, with this large of numbers of presbyters, there is only one Angel in each of these Churches. What can he be but a bishop? – a bishop too with the prerogatives which we ascribe to one” (p. 79). One may (and should) discuss the details of Trench’s argument, but I think he has made a strong case for the “human” (as opposed to “angelic”) interpretation of these ‘angels.’ I would suggest that this issue is a good topic for a paper (or, perhaps, a thesis).

I believe that these sample quotes and summaries are enough to show that Trench’s opus is worthwhile to study. Repeatedly, Trench cites other commentators, not only in English and German, but in Latin and, occasionally, Greek as well. Undoubtedly, it makes the commentary more difficult to read for many, but Trench’s opus seems to me to be worth the effort needed to study it.

In a lengthy excursus, added as a sort of appendix (pp. 291-312), Trench discusses “the historico-prophetical interpretation of the epistles to the seven churches of Asia” (p. 291). Trench notes that all the interpreters were agreed that Revelation 2-3 “were also written for the edification of the Universal Church” (p. 293), that the seven churches “in some sort represent the Universal Church” and therefore offer moral and spiritual guidance to all Christians (p. 293). Trench summarises what we can learn from each church (pp. 294f).

The “Periodists” claim that “we have in them [the seven messages] … a prophetic outline of seven successive periods of the Church’s history” (p. 296). Trench cites Joseph Mede and Vitringa. Trench asserts – correctly – that the Church Fathers were not periodists. The first were the “Spiritualists, or extreme Franciscans,” not Augustine or Chrysostom (pp. 299f). They took their lead from Joachim of Fiore (p. 301). The The “Spiritualists” used this type of interpretation “for the assault of the dominant Church and hierarchy of Rome” (p. 300).

Their interpretation was modified chronologically and dogmatically after the Reformation, which “was easily effected.” “The whole thing was a subjective fancy of men’s minds, not an objective truth of God’s Word, and would therefore oppose no serious resistance” (p. 301). The periodist – or church-historical – interpretation assumed importance, primarily in the Reformed Churches of Holland from about 1650 and into the next century. Cocceius (1603-1669) was the primary promoter (pp. 303ff). Cocceius divided the Church’s history into seven periods before Christ’s coming and seven after. Cocceius did not deny a historical element in the seven messages, but others did (e.g., Floerke, Lehre vom tausendjährigen Reiche. Marburg, 1859, pp. 59ff; see Trench, p. 305 n. 1).

As modern interpreters agree, the prophetico-historical interpretation lacks Scriptural foundation. Trench notes that it also lacks the seal of history (p. 308). And the periodists do not agree (p. 309).

Well, I have summarised enough of what Trench himself call “the arbitrary artificial character of all the attempted adaptations of Church history to these Epistles” (p. 312). A final quote, though: “The multitude of dissertations, essays, books, which have been written, and still are being written, in support of this scheme of interpretation, must remain a singular monument of wasted ingenuity and misapplied toil; of the disappointment which must result from a futile looking into Scripture for that which is not to be found there … ” (p. 312).

The 312 page 1862-edition of Trench’s commentary, published by Charles Scribner in New York, is available in an electronic edition at The Digital Christian Library (direct link to pdf-format here).