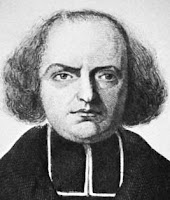 Jacques Paul Migne (1800-1875) is famous for his Patrologia cursus completus which consists of a Latin series in 221 volumes and eventually a bilingual Greek-Latin edition of the Greek texts in 165 volumes. See more at Wikipedia.

Many of the volumes are now superseded by critical editions. But some volumes are not. Useful are also the indices that allow us to identify sources cited.

The on-line edition is published at Documenta Catholica Omnia.